This report contains the 7 country studies  – Belgium, Estonia, the Netherlands, Poland, Serbia, Spain and Sweden –  that were undertaken as part of the second phase of project TARGET. While the reader will be able to observe interesting similarities between the situations in these countries, it is clear that gun violence in Europe is not a homogenous phenomenon.

In the first phase of Project TARGET quantitative and qualitative data on gun violence and firearm trafficking was collected in 34 European countries (27 Member States of the European Union, the United Kingdom, and six countries in the Western Balkans). In a second phase, dedicated research teams analysed the situation in seven European countries in depth. The results of the comparative analysis of all the data collected during the different phases of Project TARGET were published in the report Targeting gun violence and trafficking in Europe that was published by the Flemish Peace Institute in December 2021.

This project was coordinated by the Flemish Peace Institute and cofunded by the European Union. The research partners in this project were Leiden University, Arquebus Solutions, Stockholm International Peace Research Institute (SIPRI), the University of Warmia and Mazury in Olsztyn, and the Victimology Society of Serbia. The project was supported by Europol, the Dutch National Police, the UN Office on Drugs and Crime (UNODC), the South Eastern and Eastern Europe Clearinghouse for the Control of Small Arms and Light Weapons (UNDP’s SEESAC) and the European Centre for Drugs and Drugs Addiction (EMCDDA). 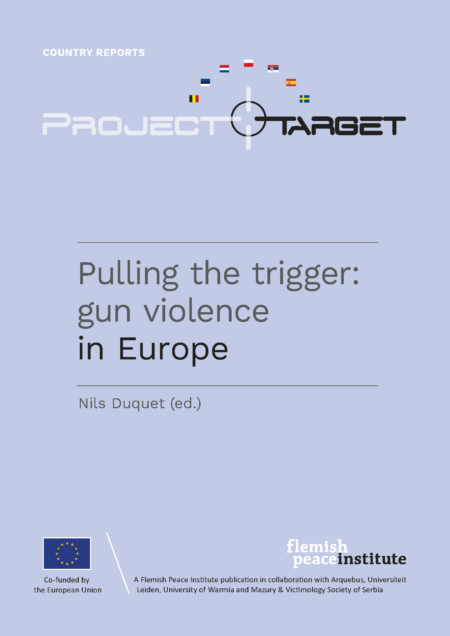