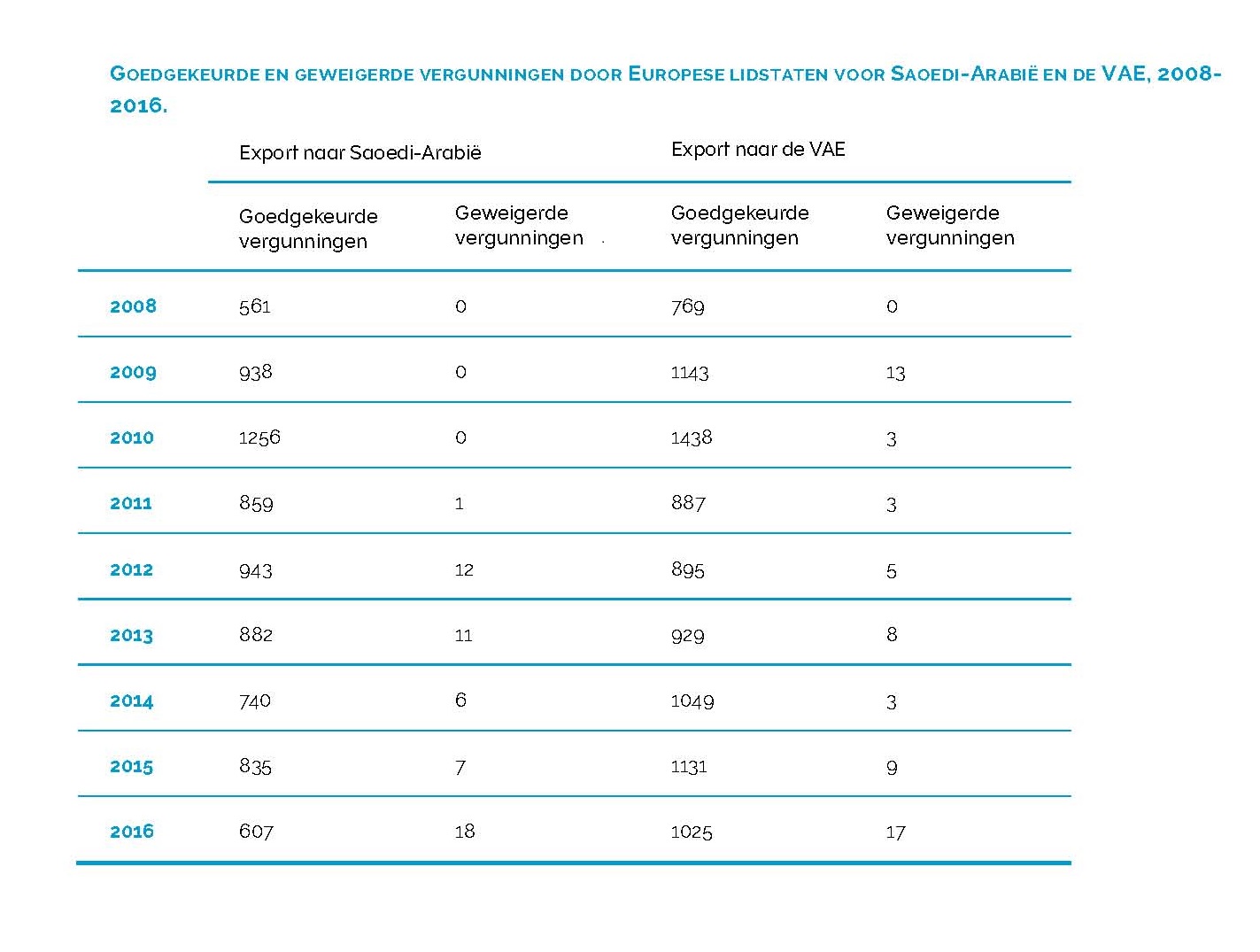 In 2016, EU member states denied a historically high number of licences for arms  exports to Saudi Arabia and the UAE. The Flemish Peace Institute comes to this conclusion based on an analysis of the recently published official EU annual report on arms exports.

EU member states denied a combined number of 18 licences for the export of weapons and military equipment to Saudi Arabia and 17 licences for export to the United Arab Emirates (UAE) in 2016. These numbers are significantly higher than previous years. Moreover, defence companies appear to have received prior informal warnings that licences to Saudi Arabia were unlikely to be issued, keeping them from launching a formal application procedure.
In the past years, several EU member states have reassessed their position regarding arms exports to Saudi Arabia and the UAE, often as a result of parliamentary and civil society pressures. This was a direct consequence of the involvement of both countries in the Yemen and Syria conflicts. “Several countries cited the likelihood of the arms being used for human rights violations, or ending up in the hands of other end users, as the main reasons to deny arms exports to these countries”, says Diederik Cops, researcher at the Flemish Peace Institute.
It can also be observed that those countries that deny export licences to Saudi Arabia and the UAE, are the ones where there was a high amount of parliamentary and public attention for these issues. Cops remarks that “this shows that political attention for foreign policy in general and for arms trade in particular can have a considerable effect on arms export policies.”

Notwithstanding the high number of denied licences, some EU member states continued to export significant volumes of weapons and military equipment to Saudi Arabia and the UAE in 2016. Member states such as France, Germany, Italy and the UK are among those issuing the highest numbers of export licenses.
This reflects an important conclusion of the Flemish Peace Institute’s recent comparative analysis of EU member states’ arms export control systems: “There is a set of European criteria to evaluate arms export licences. Yet governments continue to interpret these criteria in light of their own national foreign and security policy and their national economic interests. A harmonised arms export policy remains difficult to achieve as long as the EU does not develop a more unified common foreign and security policy – and vice versa,” says Diederik Cops. “In order to have a real harmonised arms export policy, Europe will need to focus more on transparency and information exchange. This would increase governments’ accountability over arms exports.”

Table. Approved and denied licences by European member states, for Saudi-arabia and the UAE, 2008-2016.