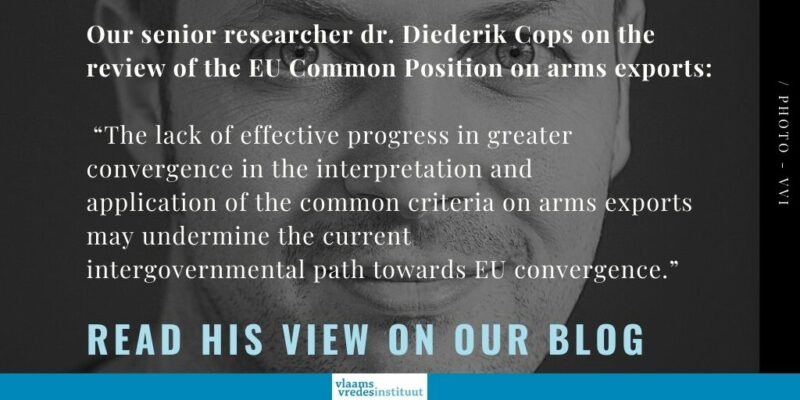 Ten years after its adoption and for the second time, the 2008 EU Common Position defining common rules governing control of exports of military technology and equipment was the subject of a formal review process. This review process was prepared by the Working Party on Conventional Arms Exports (COARM) and resulted in the formal adoption of the Council Conclusions on the review of Council Common Position 2008/944 on the control of arms exports on the 16th of December 2019.

Goal of this blog post is to reflect on what the review process has achieved and what it hasn’t achieved, and, secondly, reflect on what the future may possibly bring for the EU’s work on promoting convergence in Member States arms export policies and practices.

Want to read more? Check out this policy brief.

An important first conclusion on the outcome of the review process of the Common Position is the observation that the European council recalls its commitment to strengthen controls on the export of military equipment and to promote convergence in the field of conventional arms exports via the implementation of high and common standards within the CFSP-framework.

However, simply reiterating this goal, which has been in place since beginning of the 1990s (when the eight common assessment criteria were formulated for the first time), is not that difficult and not that remarkable. On the contrary, not mentioning it would be more controversial, as it would imply a fundamental shift in policy, or at least in formal political discourse. The central question to evaluate the outcome of the review process should therefore be: what steps or initiatives are taken as a result of the review process to work towards that goal of convergence in the implementation of high common standard in the assessment of arms exports? Let us therefore take a deeper look in the changes to the text of the Common Position and the User’s Guide to the Common Position.

The review process: focusing on transparency and information-sharing

Taking an analytical look at both documents, it becomes clear that the review process has strongly focused on the issue of transparency and, somewhat less, information-sharing. In the Common Position, strengthening transparency and information exchange between EU Member States are two important mechanisms aimed to increase convergence in Member States’ arms export policies and practices. Especially on transparency, some important achievements need to be mentioned. For this analysis of what the review process has achieved in terms of transparency and public reporting, I will build on four dimensions of transparency: readability, timeliness, comprehensiveness, and comparability.

It is however remarkable that these latter elements are not included in the Common Position but in the User’s Guide and they are also formulated in a much less binding manner. It thus remains to be seen how these elements will effectively influence Member States’ reporting practices.

Of course, the proof of the pudding is always in the eating. How will the database look like and what information will it contain? Will all Member States live up to their obligations to report before the 30th of June? Will all the information that is (kindly) requested in the user’s guide be made available by all Member States?  Past experiences may allow for some skepticism, but it is clear that, at least on paper, progress is made on this aspect.

In a similar manner, the review process also resulted in some initiatives to strengthen information-sharing between Member States via the expansion of the online possibilities and the update of the User’s Guide.

Transparency and information-sharing as necessary, no sufficient conditions for convergence

However, and this is an important issue, strengthening transparency and information exchange between Member States is not the goal of the Common Position, but are merely means to work towards the goal of strengthening convergence in the implementation of high common standards. They are necessary, but no sufficient conditions for this. In other words, increased transparency and information exchange will not in itself result in increased convergence in Member States’ arms export policies. Although the European process is an incremental one, it is not a process that will happen in, and of itself. Concrete steps or initiatives remain necessary.

It is therefore interesting to conclude that, apart from some more technical issues, nothing has changed to the wording of the eight common assessment criteria. And although there is a case to make that the common criteria in itself are not problematic or necessarily need to be rewritten, it remains a remarkable conclusion that no concrete elements are forwarded in the Council Conclusions which could effectively strengthen the common interpretation of these assessment criteria.

What will the future bring?

Looking in the future and thinking about what the future will bring is not self-evident and needs to be done with a sense of caution, even some level of reluctance. However, the lack of effective progress in greater convergence in the interpretation and application of the common criteria on arms exports may, given some external, systemic pressures of which the process towards greater EU defence cooperation and the set-up of the European Defence Fund are the most important, may undermine the current intergovernmental path towards EU convergence. Two possible scenarios might, as a result, develop over time. Important to stress however is that none of these scenarios is inevitable.

One possible scenario is a hollowing out of the idea of European convergence between Member States’ policies via the intergovernmental path and a return to national and ad-hoc arrangements. Already a growing reluctance among civil society actors can be observed, who were the among the first advocating for European convergence, to continue pushing for the idea of European harmonisation. Equally, national governments in Europe, pressured by domestic parliamentary and public scrutiny, are (once again) changing their arms export policies without waiting for a European-wide perspective, which is often denounced as impossible to reach. In the current context of increased European defence cooperation this may give rise to a return of ad-hoc or multilateral agreements on arms exports, resulting in a gradual decline of the relevance of the Common Position.

A second scenario, however, is a further supranationalisation of arms export controls. The European Commission has until now been acting relatively low profile on this issue. The EDF, giving the Commission a more direct stake in this domain, might change this. The Commission position could be strengthened by case law of the European Court of Justice on the interpretation of article 346 of the Treaty on the Functioning of the EU. This article allows Member States to take measures as it considers necessary for the protection of the essential interests of its security which are connected with the production of or trade in arms, munitions and war material. While Member States have interpreted this article as excluding the whole defence sector from the remit of EU law, ECJ case law is resulting in a much narrower interpretation as a case-by-case derogation in very specific circumstances. The Commission could, like the competence over dual-use export controls, rely on its exclusive competence over the common EU commercial policy, which includes the uniformity in export policy, to increase its role in arms exports. It would also be interesting to see how an alliance could be formed with other stakeholders in this scenario. In the first place the defence related industry in Europe, but also, and maybe a bit surprisingly, the European Parliament. The European Parliament has become more involved in arms exports in recent years and is an important advocate for a further Europeanisation of arms export controls. It is unclear what direction this involvement may take, but a maybe unlikely Commission-Parliament coalition may be pushing for a further supranationalisation of arms export controls at the level of the EU.

In both possible scenarios, COARM in this scenario would function as a mailbox for sharing information on denied arms exports and a meeting place where Member States’ national policies and practices are expressed, instead of being an instrument for increased cooperation, developing new mechanisms to promote EU convergence. Important is that COARM takes up its role and goes further than ‘merely’ allowing Member States representatives to voice its country official policy vis-à-vis different countries or regions. The Councils conclusions open the door in that the Common Position now foresees Member States to promote convergence ‘via the possibility to identify possible measures to further increase convergence’. In this respect the Council also expands and clarifies COARM’s mandate. This constitutes an opportunity for COARM to explore ways to improve its working methods and to effectively set up initiatives to strengthen convergence. An important condition necessary for COARM to be able to take up a stronger role, is that national governments allow their representatives in COARM to take this task seriously. This, however, requires Member States to realize that convergence in arms export policies would be beneficial for all Member States.